LIME is an extremely customizable web based editor that guides the user through the markup of non structured documents into well formed (optionally valid) structured XML document compliant to the language plugin chosen by the user. The LIME editor relies on many open source technologies:

ExtJS is a MVC framework that permits to build extraordinary rich web application. It supplies the instruments to develop easily the core of the application based on the Model View Controller pattern and, moreover, comes with a big range of user interface widget. The other core strength of ExtJS is its component design. If the developer need a new component that is not yet developed the default components can be extended and the result is encapsulated in the default components. ExtJS is also completely cross browser so it is possible to deliver the application on an incredible set of browser and operating system. Also the modernest smart phone’s and tablet’s browser are covered so it is possible to use the applications based on ExtJS with touch screens and gestures.

TinyMCE is a platform independent web based javascript HTML WYSIWYG editor control. It has the ability to convert HTML text area fields or other HTML elements to editor instances. We integrated it in ExtJS developing a new component of the framework. The component preserves all the functionality of TinyMCE editor but the effects of those functionalities are intercepted by the core of the ExtJS application. With this strategy each event handled by the editor simply fire other events handled by the other components of the application. This means that there is no logic relied to TinyMCE itself and it can be substituted with other open source WYSIWYG on demand.

LIME is based on a four tier client side architecture. The application logic is completely relied to the client. It communicates with the server side that is hosted by an apache web server. The following figure depicts the overview of the LIME architecture: 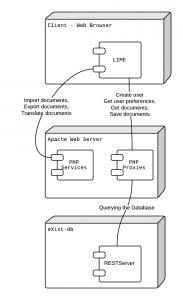 The web server has three tasks:

The editor uses the HTML5 standard in order to markup the documents. When an element is marked it is wrapped by a generic HMTL element (such as span or div) and various classes are assigned to it in order to give to it semantic meaning for the editor itself and for the tool that has in charge to translate it to the desired document format. This means that there is not a meta markup language in the middle of a translation between HTML to another document format and this give the benefits to avoid the loss of data and to have immediately available the HTML version of the document without further conversions.

When we mark up a “Preface” we will have the following HTML code:

By continuing to use the site, you agree to the use of cookies. more information